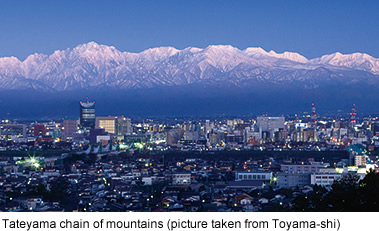 The Hokuriku region, our service area, is conveniently situated within 300 km of Japan's three major metropolitan areas - Tokyo, Osaka and Nagoya. This geographical advantage combines with a desirable natural environment and an abundant labor force to give the region a great growth potential and a promising future.
Also, the combined gross domestic product of the three prefectures in the Hokuriku region - Toyama, Ishikawa and Fukui - reached about ¥12 trillion (in nominal erms in FY2013), which is equivalent to the GDP level of New Zealand, Hungary, etc.
As the gateway to the nations bordering the Sea of Japan, the Hokuriku region has recently come to be considered the frontiers of new developments in the 21st century.

The development and expansion of transportation systems have reduced the traveling time between Hokuriku and other regions of Japan, particularly the three major metropolitan areas, leading to further promotion of human and economic exchanges. 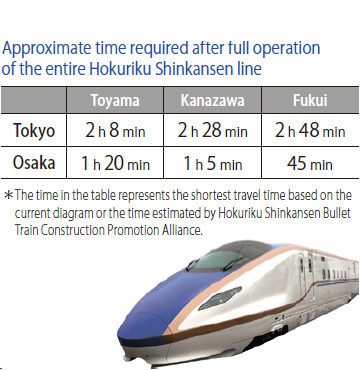 In the railway sector, the Hokuriku Shinkansen bullet train has started commercial operation directly from Tokyo to Kanazawa on March 14, 2015 and the construction work in the Kanazawa-Tsuruga section is in progress for the start of commercial operation from the end of FY2022.
In the road transportation sector, the Tokai-Hokuriku Expressway was brought into full operation in 2008. Construction of the Noetsu Expressway and the Chubu-Jukan Expressway has been well underway and some sections of such expressways have come into service. The Maizuru-Wakasa Expressway was brought into full operation in July 2014 to connect the Chugoku Expressway, the Meishin Expressway and the Hokuriku Expressway together, improving inter-regional access significantly.

On the other hand, in the air transport sector, the Noto Airport started operation in 2003 and has two round-trip flights to Tokyo in a day. The Komatsu Airport has international passenger flights to three destinations such as Taipei, Seoul and Shanghai and regular international cargo flights to Europe and North America. Moreover, the Toyama Airport operates a total of four international flight services to Seoul, Dalian and Shanghai including Taipei where the flight service from the airport started in 2012.
In the sea transportation sector, functions of important ports such as Nanao, Kanazawa and Tsuruga ports are being reinforced at present, including Fushiki Toyama port, an international hub port of the Hokuriku region. Also, in selection of major sea ports along the Sea of Japan with an aim to promote economic exchange with China, South Korea and Russia on the other side of the Sea of Japan and build a highly disaster-resistant logistics network in consideration of the Great East Japan Earthquake, Fushiki Toyama port was selected as an integrated hub port, Kanazawa and Tsuruga ports as major sea ports along the Sea of Japan, and Nanao port as a candidate for development of a hub port (November 2011).

Hokuriku has a rich cultural heritage and a wealth of scenic and historic sites, and many traditional crafts fostered by the cultural climate of the region are still
thriving.
To the east lie the Japan Alps, a range of mountains rising 3,000 meters above the sea. From these mountains flow the rivers that provide Hokuriku with plentiful water resources. The low-cost, abundant hydroelectric power generated by abundant water resources of these rivers led to early development of steel, chemical and textile industries. In addition to its role as a major production center for aluminum products, machinery and other goods, Hokuriku is home to numerous world-famous enterprises and is the leading industrial region along the Sea of Japan.